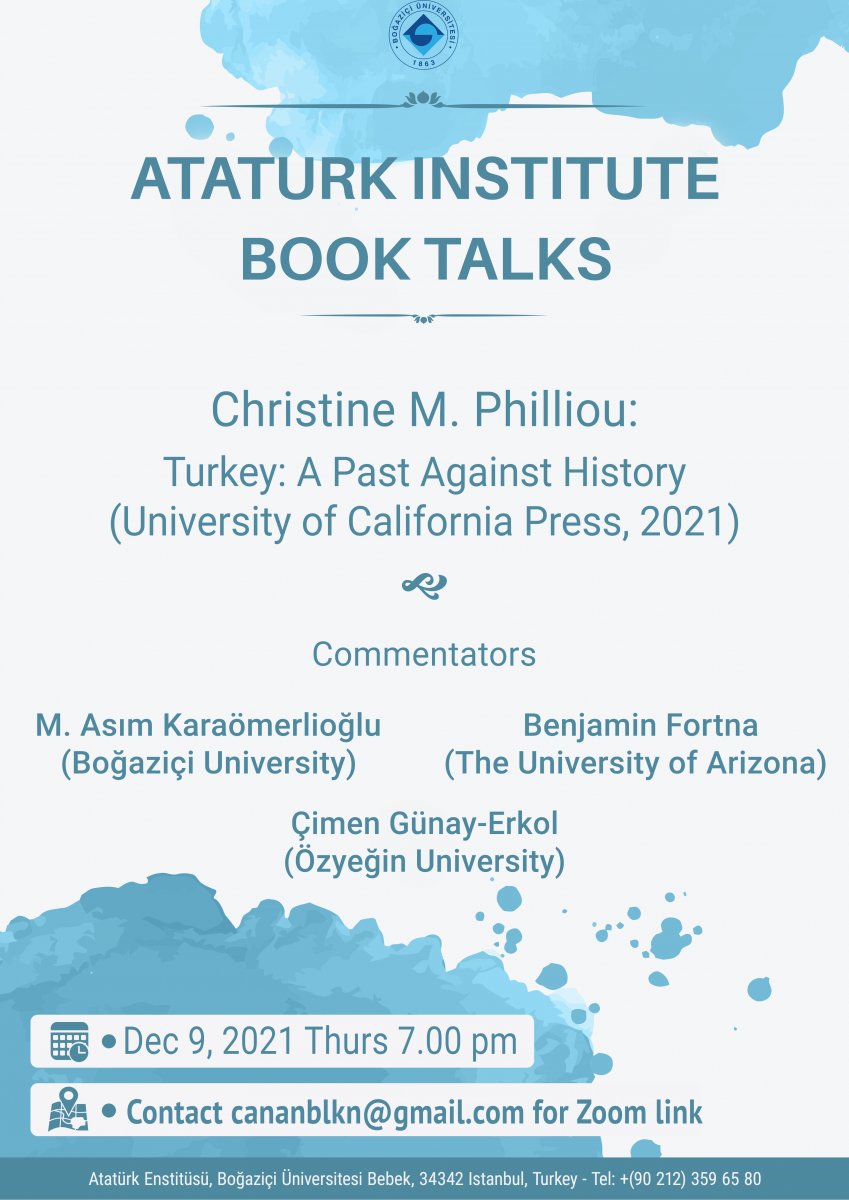 The Ataturk Institute for Modern Turkish History cordially invites you to a Book Talk by Christine M. Philliou “Turkey: A Past Against History (University of California Press, 2021)” with participation of M. Asım Karaömerlioğlu (Boğaziçi University), Benjamin Fortna (The University of Arizona) and Çimen Günay-Erkol (Özyeğin University) on December 9, at 7pm (Istanbul time) via Zoom.

From its earliest days, the dominant history of the Turkish Republic has been one of national self-determination and secular democratic modernization. The story insisted on total rupture between the Ottoman Empire and the modern Turkish state and on the absolute unity of the Turkish nation. In recent years, this hermetic division has begun to erode, but as the old consensus collapses, new histories and accounts of political authority have been slow to take its place.

In this richly detailed alternative history, Christine M. Philliou focuses on the notion of political opposition and dissent—muhalefet—to connect the Ottoman and Turkish periods. Taking the perennial dissident Refik Halid Karay as a subject, guide, and interlocutor, she traces the fissures within the Ottoman and the modern Turkish elite that bridged the transition. Exploring Karay’s political and literary writings across four regimes and two stints in exile, Philliou upends the official history of Turkey and offers new dimensions to our understanding of its political authority and culture.

Christine Philliou specializes in the political, social, and cultural history of the Ottoman Empire and modern Turkey and Greece as parts of the post-Ottoman world. Her first book, Biography of an Empire: Governing Ottomans in an Age of Revolution (University of California Press, 2011; Greek edition Alexandria Press, 2021; Turkish edition İş Bankası Kültür Press, 2022), examined the changes in Ottoman governance leading up to the Tanzimat reforms of the mid-nineteenth century. It did so using the vantage point of Phanariots, an Orthodox Christian elite that was intimately involved in the day-to-day work of governance even though structurally excluded from belonging to the Ottoman state. Her second book. Turkey: A Past Against History (University of California Press, 2021; Greek edition Alexandria Press, 2022), focuses on the fraught history of the idea of opposition/dissent, connecting literature, politics and teh construction of official History in the Ottoman Second Constitutional and Republican period of Turkish history. In it, she highlights the political, personal and intellectual/artistic itinerary of the Ottoman/Turkish writer and perennial dissident Refik Halid Karay (1888-1965). The premise is that, in the absence of a sustained opposition party between 1908 and 1950, there developed a more abstract space of oppposition and dissent, half in the imagination and half in political reality, in Ottoman, and then after 1923 Republican Turkish intellectual life. She uses Refik Halid Karay, and the concept of muhalefet in Turkish, to explore the changing nature and contours of that space through the supposed rupture that separated the Ottoman Empire from Modern Turkey. Her interests and other publications include comparative consideration of empires across Eurasia, the various levels of transitions from an “Ottoman” to a “post-Ottoman” world in the nineteenth and twentieth centuries, and political and cultural interfaces in the eastern Mediterranean, Middle East, and Balkans in the early modern and modern eras.