ATASeminars: "Itinerant Revolutionaries: The Young Turks and the International Order at the End of the Ottoman Empire" by Dr. Alp Yenen 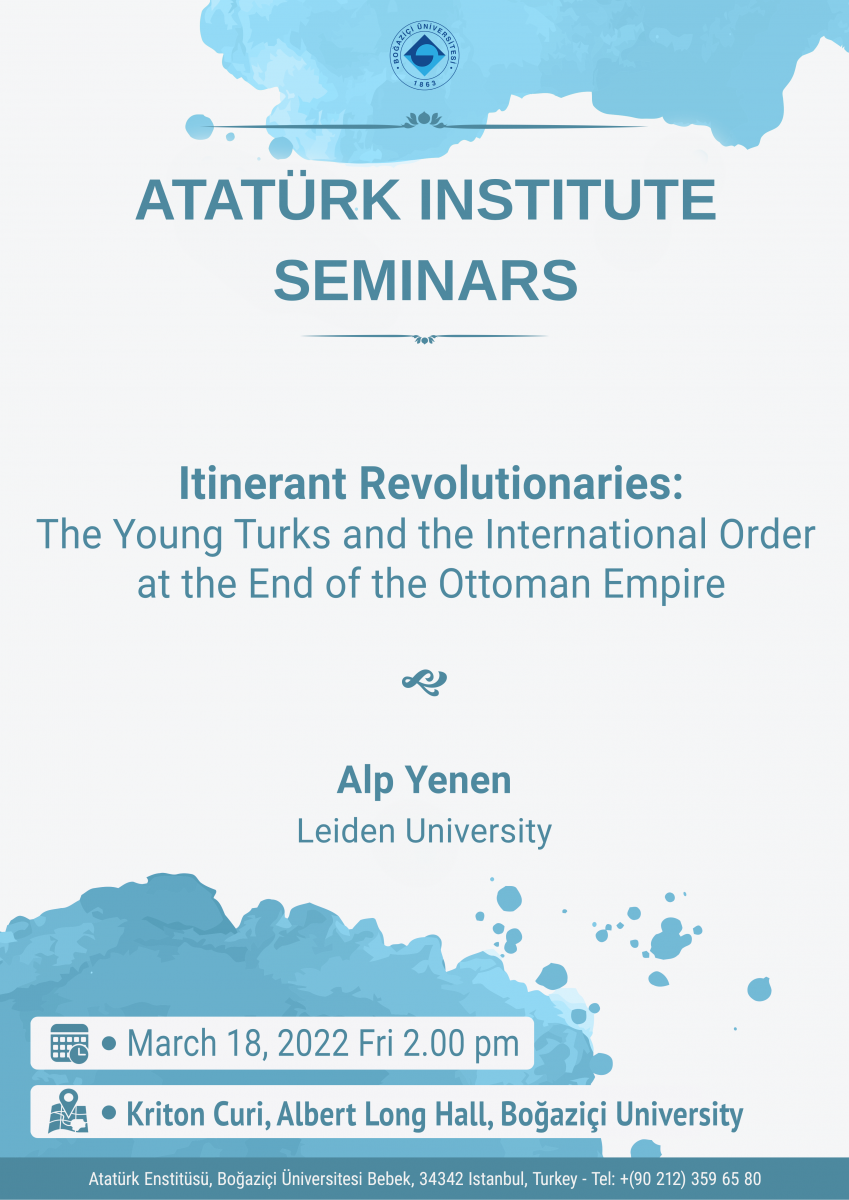 After the Ottoman defeat in the First World War in 1918, the “Young Turk” leaders Enver, Talat, Cemal, and some of their friends fled abroad to escape military tribunals for their war crimes. During the crisis of British Empire, when the peace settlement in the Middle East was challenged by local revolts from Morocco to Afghanistan, the Young Turks reemerged in international politics. They organized a transnational network of Turkish, Arab, and other Muslim activists in an anticolonial struggle against European colonialism. Finding support from German revanchists as well as funding from Soviet Russia and the Communist International, they founded the Union of Muslim Revolutionary Societies (İslam İhtilal Cemiyetleri İttihadı). As a kind of “Islamic International” with secret branches in Berlin, Rome, and Moscow, this organization aimed to unite and command Muslim revolutionaries across Asia and Africa. As transnational actors, the Young Turk leaders were involved in diplomatic settlement of Soviet Russia with Muslim states, and aligned themselves with multiple antiimperialist movements from Ireland to India. Although embodying a great threat in the eyes of European officials, by the summer of 1922, the Young Turk leaders were already marginalized and all killed in Berlin, Tbilisi, and Turkestan. While their movement disappeared with them, it left behind disputed legacies. The question is, why were the fugitive Young Turk leaders perceived as powerful actors in the eyes of their supporters and enemies, capable and responsible for the postwar unrest in the Middle East? And, what led to their ultimate fall at the onset of the international settlement of 1922, despite being perceived as powerful? The answer lies not only in understanding how the Young Turk leaders operated as revolutionary non-state actors, but also in appreciating how their partners and rivals made sense of their transnational activism in international politics. Based on an extensive research in private papers and archival documents, this talk will retell a familiar story to unpack how fears of Muslim internationalism shaped the international order at the end of the Ottoman Empire.

Alp Yenen is an assistant professor of modern Turkish history and culture at the Leiden University Institute for Area Studies. He is a historian of the modern Middle East, specialized on the connected and comparative history of contentious politics during the transitional period from empire to nation-states. He completed his BA and MA at the University of Munich. In December 2016, he received his PhD from the University of Basel. He was a doctoral fellow of the Konrad Adenauer Foundation as well as a doctoral research associate and postdoctoral senior resident at the University of Basel. Currently, he is finalizing a book manuscript based on his PhD thesis on the international history of Young Turk networks and Muslim revolutionary movements during the aftermath of the First World War (under advanced contract with Columbia University Press). His co-edited volume with Ramazan H. Öztan, Age of Rogues: Rebels, Revolutionaries, and Racketeers at the Frontiers of Empires is published with Edinburgh University Press in July 2021. Moreover, he is co-editing with Erik-Jan Zürcher a sourcebook for the centennial of the Republic of Turkey and developing a research project on the Cold War history of political violence in Turkey during the long 1970s. He has published in edited volumes and in journals such as Comparative Studies in History and Society, Contemporary European History, Behemoth – A Journal on Civilisation, Die Welt des Islams: International Journal for the Study of Modern Islam, and Middle Eastern Studies.